To share your memory on the wall of Victor Cascio, sign in using one of the following options:

Print
Victor Carl Cascio, 88, of Kenosha, WI was called to eternal rest with the grace of the sacraments and his family by his side on Friday, October 30, 2020.

Born in Sacramento, CA, on April 13,1932, he was the son of the late Anthony an... Read More
Victor Carl Cascio, 88, of Kenosha, WI was called to eternal rest with the grace of the sacraments and his family by his side on Friday, October 30, 2020.

Born in Sacramento, CA, on April 13,1932, he was the son of the late Anthony and Rose Cascio. Victor grew up in Rockford, IL. At the age of 3, he was diagnosed with polio, which never stopped Victor from living a full and active life.

Victor (Veto) is preceded in death by his sisters, Angela (Raymond) Eklund and Bertha (Vito) Santini. Victor is survived by his sisters, Mary (Jerry) Angileri and Josephine (Chuck) Matthews who reside in Rockford, IL.

Victor attended the University of Wisconsin, Madison and graduated with high honors and a degree in Physical Therapy.

Victor was married in 1957 and is survived by his loving wife of 63 years, Patricia Jean Howell from Rockford, IL.

On the weekends during his career, Victor would be found with a hammer and saw, remodeling their cape-cod home making room for additional bedrooms, larger kitchen and an additional family rooms as God blessed Victor and Patricia with nine children. Victor along with his wife, had a love and passion for plants and nature in and around their home. Nurturing a seed to a bloom gave him great pleasure. Victor eventually even learned the unique art of Bonsai.


During Victor’s earthly sojourn, you could never separate him from the love of his life, Patricia. Together, they showed those around them that love can only be achieved through the joy of sacrifice. Their model of sacrifice was Christ crucified.

May God grant that we all meet together as a family once again in the heavenly fatherland.

We would like to thank Fr. John Graziano, Fr. Dwight Campbell, and Fr. John Richetta for providing Victor with the holy sacraments of the Church and to Dr. Joseph Paukner and Mark Petersen, PA for their expert care in managing Victor’s health.

Donations will be used for a set of Gregorian Masses for his soul and we ask you to please continue to pray for the repose of his soul.

Family condolences and visitation will be at 9am on Tuesday, November 3, 2020, at Our Lady of Mount Carmel Catholic Church, in Kenosha, WI. A Requiem Tridentine Mass will follow at 10am.

Entombment will follow the Mass at All Saints Cemetery Mausoleum in Pleasant Prairie, WI.

To send flowers to the family or plant a tree in memory of Victor Cascio, please visit our Heartfelt Sympathies Store.

Receive notifications about information and event scheduling for Victor

We encourage you to share your most beloved memories of Victor here, so that the family and other loved ones can always see it. You can upload cherished photographs, or share your favorite stories, and can even comment on those shared by others.

Blooming Garden Basket was purchased for the family of Victor Cascio. Send Flowers

Posted Nov 02, 2020 at 04:38pm
Our thoughts and prayers are with you during this difficult time. We are so sorry for your loss & hope the wonderful memories will last in your heart

Posted Nov 01, 2020 at 10:54pm
Dear Pat and the entire Cascio family,
We’re so sorry to hear of Vic’s passing. Our prayers and condolences to all of you at this sad time. We have many fond memories being your neighbors for 40 years, enjoying his friendship and humor. May he Rest In Peace.
Laurie and Kurt Harff
Comment Share
Share via:
M

Posted Nov 01, 2020 at 01:40pm
Dear Stephen,
Deb and I send you and your family our love and sympathy. We hope that Vic’s life has left you all with smiles and memories
last the rest of your lives.
Deb Hertzberg and Mike Serpe
Comment Share
Share via:
CF

Posted Nov 01, 2020 at 08:14am
My deepest condolences to the entire Cascio family. Vic helped me get my first healthcare Job as a physical therapy aide at Kenosha Hospital after being a volunteer there. Vic helped me learn to connect with patients and I have never forgotten his warm smile. He was a great man with a huge heart.
-Chris Froh
Comment Share
Share via: 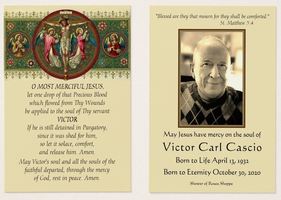