To share your memory on the wall of Janet Ruefer, sign in using one of the following options:

Born in Rockford, IL on June 11, 1933, she was the daughter of the late Rudolph and Gerda (Wissman) Gardner.

Born in Rockford, IL on June 11, 1933, she was the daughter of the late Rudolph and Gerda (Wissman) Gardner.

Prior to having children, Janet was a Radiology Technician at Rockford Memorial Hospital. After her children grew, she returned to the workforce and was employed in retail at HC Prange’s and JC Penney’s.

Aside from her parents and husband, Harold, she is preceded in death by two brothers, Ron and Len Gardner.

A visitation will be held on Monday, March 15th, at St. Mary Lutheran Church, 2001 80th Street, from 9:00 a.m. until the time of service at 10:00 a.m. Interment will follow at Sunset Memorial Gardens, 8800 N Alpine Rd. Rockford, IL 61115. Facial coverings and social distancing are required to attend services. In lieu of flowers, memorials to Aurora At Home Hospice, www.aurorahealthcarefoundation.org, would be appreciated by the family.

Receive notifications about information and event scheduling for Janet

We encourage you to share your most beloved memories of Janet here, so that the family and other loved ones can always see it. You can upload cherished photographs, or share your favorite stories, and can even comment on those shared by others.

Plant a Tree in Memory of Janet
Plant a tree 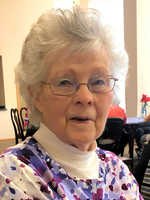