To share your memory on the wall of Gordon La Combe, sign in using one of the following options:

On December 19, 1970, Gordon married Judy (Weber) La Combe at Grace Lutheran Church. The couple was introduced by a mutual friend and their first date was at the Question Mark Lounge in downtown Kenosha. When asked to retell the story of how they met by their children, Gordon always said “oh she was way out of my league”, but Judy reported that he was the smartest and most interesting man she had ever met. Little did they know at the time, they would go on to enjoy 50 years of wedded bliss.

As a son of a WWll veteran, Gordon always held a deep respect for the military. He served his country by joining the Wisconsin National Guard, completing his basic training in Oklahoma. Later, he was a member of the Air Force Reserve.

Gordon was a vivacious man with a wonderful sense of humor. He loved talking to and learning from everyone—friends and strangers. He worked on crossword puzzles every morning to keep his brain sharp. He enjoyed playing competitive games of scrabble with his sisters during family get togethers, and over the years, many eyes have rolled over the telling of his puns. These personality traits, along with his talent in drawing and photography led to his long career in newspaper advertising sales, including employment at the Kenosha News and Waukegan News Sun.

Undoubtedly, Gordon’s most passionate hobby was airplanes. If he heard a small airplane fly over the house, he would look up and identify it, or the owner, and always have something insightful to say. His lifelong interest in aviation began when he was young, and he was one of the earliest members of the Experimental Aircraft Association (EAA). He was proud to say he had attended every annual EAA convention. During the 1970’s Gordon had a booth at Oshkosh, creating personalized sketches of pilots’ small planes. He had a vast knowledge of most aspects of aviation, and was considered to be a WWll aviation historian. One of his favorite pastimes was spending weekends at the Kenosha Airport with his “pilot buddies”. He was also a member of the Midwest Antique Aircraft Club (MAAC) and rarely missed the Grass Roots Fly-in held in Brodhead. Later in life, he gained a new appreciation for ultralights and enjoyed spending sunny summer days at the “pig farm” aka Winfield Airport in Bristol.

An avid reader of many genres, Gordon liked to be surrounded by books, magazines, and newspapers. He had an impressive personal collection and spent many hours at the library. For the past several years, he volunteered for the “Friends of the Library” book sales.

Gordon and his wife took every opportunity they could to travel. They visited their son in California many times, and their daughter in France and England. Perhaps their favorite trips were the many weekend road trips they took around the midwest exploring small towns and stopping at every library and little airport along the way.

For the past nine years, Gordon did not have much time to travel as he was busy caring for his grandson Liam - teaching him old cowboy lingo and looney toons quotes and encouraging his own artistic talent.

Gordon’s own curiosity for life was passed on to all who knew and loved him, especially his family. He is survived by his wife Judy; son Douglas La Combe, daughter Elizabeth La Combe; and grandson Liam Engel. He is further survived by his sisters Eve Kropp, Julie (Dave) Hird, Janet La Combe, and Margaret (Steve) Koller. He is also survived by his sisters-in-law Peggy (Larry) Moreland, Sally Weber Bowman, and Jean (Armando) Orellana; as well as many loving nieces and nephews.

Due to current health concerns, the memorial service for Gordon will be private. A larger celebration of Gordon’s life will be held in the summer. In lieu of flowers, please consider a donation to the family to be used toward funding an EAA Youth Education Scholarship or a contribution to a charity of your choice.

Receive notifications about information and event scheduling for Gordon

There are no events scheduled. You can still show your support by sending flowers directly to the family, or planting a memorial tree in memory of Gordon W. La Combe.
Plant a Tree

We encourage you to share your most beloved memories of Gordon here, so that the family and other loved ones can always see it. You can upload cherished photographs, or share your favorite stories, and can even comment on those shared by others.

Posted Dec 07, 2020 at 08:00am
I first met Gordie in Madison, Wisconsin. He and Judy met a friend and I and I remember thinking what a great sense of humor he had and how much fun Judy was going to have with him in her life. The next time I saw them together was when they brought Elizabeth who was just a few weeks old to see my husband, Ron, and my sons, Chris, Tim and Jeff . They had just turned 1 and Gordie brought his camera and took some of my favorite pictures of my boys. I still have one of them as the ‘official 1st birthday picture’ on my wall.
We moved to Michigan and Judy and I kept in touch by mail. I was visiting my sisters in Milwaukee and took the kids to the museum and we ran into Gordie, Judy, Elizabeth and Douglas who was in a stroller.
After my husband’s death I moved back to Milwaukee and Judy and I were able to renew our friendship in person. She and Gordie and Elizabeth and Douglas came to my son’s high school graduation party and Gordie regaled the group with great stories. He had such a knack for telling stories!
My heart goes out to Judy, Douglas and Elizabeth and Gordie’s beloved grandson Liam. There are no words that are appropriate to say about the loss of a husband, father and grandfather except to know that his memories will live in your hearts forever!
Comment Share
Share via:
BP

Posted Dec 06, 2020 at 02:10pm
I am so sorry to hear of Gordie’s passing. He was a great brother-in-law and I have many great memories of spending time together at our family home. May the Peace of the Lord be with you, Gordie. And I pray for healing and love to surround you, Judy, Elizabeth, Douglas, snd Liam.
God, teach us to love. Jean
Comment Share
Share via:
JL

Posted Dec 06, 2020 at 01:54am
There are so many memories that keep him close, even as I miss him. God blessed me with a great big brother. He was interesting to talk with and was a good listener. I never thought he was just waiting until I was through so he could talk, unless it was to top my puns with even worse ones.

Here are a few memories that others might not know or recall.
One time when I was little and there was a severe storm; he tried to comfort me with humor. I may not have laughed, but it made me feel a bit better. When I was in high school, Gordie took me to Mitchell Field to see James Lovell visit Milwaukee during the time Lovell was at the height of his astronaut career. That was a real treat, as i was very interested in the space program during that time. Gordie went out of his way to take me there. Even more unusual was that Mom wrote me a note to excuse me from going to school that day!
A few years ago we went to Chicago by train. Gordie took me to the Art Museum, which I had somehow never before visited. Several times, he took me to local cemeteries to "visit" family and look at dates on headstones. One time, he even did some research for me to find the grave marker for someone he didn't know. I see a trend here: putting himself out for another.

I enjoyed hearing the banter between Gordie and Judy. I recall one time at a wedding reception, Judy was asking him for some money to buy a drink and he very carefully was opening his wallet to look inside. Judy made a comment about watching out for the moths flying out, since he hadn't opened the wallet for a while. Cracked me up. I remember Gordie kept a small notebook of the sayings Douglas came up with when he was little and would read some of them to me when I visited. He was quite proud of Elizabeth in a lot of ways, too, including but not limited to her musical talent. The whole family shared well-developed senses of humor. And it was very clear there was a close relationship between Liam and Gordie by the way they conversed and by Gordie's practice of leaving notes on a white board for Liam to find when Liam came over to the house. 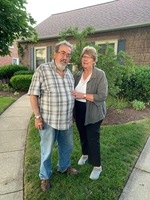 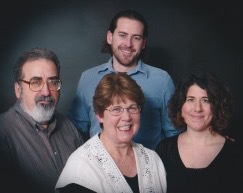