To share your memory on the wall of Fernabelle Howell, sign in using one of the following options:

Print
Fernabelle Marie Howell, 93, of Pleasant Prairie, went home with our Lord Jesus in eternal life on Tuesday, January 5, 2021, at The Manor of Kenosha, from dementia.

Born on May 21, 1927, in Readstown, WI she was the daughter of the la... Read More
Fernabelle Marie Howell, 93, of Pleasant Prairie, went home with our Lord Jesus in eternal life on Tuesday, January 5, 2021, at The Manor of Kenosha, from dementia.

Born on May 21, 1927, in Readstown, WI she was the daughter of the late Samuel and Elma (Shepherd) Owen.

Fernabelle was a dedicated and caring homemaker, raising seven children. She was a member at Southport Baptist Church, and was an avid Green Bay Packer fan.

Aside from her parents and husbands, she was preceded in death by a daughter, Doris Roach; two grandchildren, Louis and Lisa; a brother, LaVerne Owen; a sister, Donna Clark; and two sons-in-law, John Roach and Bob Salb.

The family would like to thank Kenosha Place, Froedtert-Pleasant Prairie, ManorCare, and Hospice Alliance for the compassionate care they provided Fernabelle.

Visitation will take place on Saturday, January 9th, at Proko Funeral Home, from 11:00 a.m. until the time of service at 12:00 noon. Interment will be held privately at Salem Mound Cemetery. In lieu of flowers, memorials made to the Dementia Society of America, www.dementiasociety.org/donate, would be appreciated by the family. Facial coverings and social distancing are required by those attending.

Receive notifications about information and event scheduling for Fernabelle

We encourage you to share your most beloved memories of Fernabelle here, so that the family and other loved ones can always see it. You can upload cherished photographs, or share your favorite stories, and can even comment on those shared by others.

Posted Jan 08, 2021 at 09:47am
Fern sat in the row behind us with her daughter June at Soutport Baptist Church almost every Sunday until her health no longer permitted. She always had a smile when we greeted her.
Gordon and Judi Jones
Comment Share
Share via: 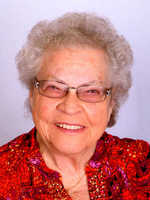