To share your memory on the wall of Eugene Roach, sign in using one of the following options:

Print
Eugene Fredrick Roach, 89, of Kenosha, passed away on Wednesday, February 17, 2021, at his daughter’s home, surrounded by his loving family.

Born in Baraboo, on February 28, 1931, he was the son of the late John and Marie (Cole) Roa... Read More
Eugene Fredrick Roach, 89, of Kenosha, passed away on Wednesday, February 17, 2021, at his daughter’s home, surrounded by his loving family.

From 1948 until his honorable discharge in 1953, Eugene served in the US Army during the Korean War. In October of 2017, he was blessed to be taken on the Honor Flight in Washington DC for 3 days with his daughter, Barbara.

He worked in construction then began working at OMC Johnson Outboard Marine in Waukegan, IL for 33 years and worked part-time for Drs Park in Kenosha for 25 years until his retirement in 1988. After retirement, Eugene and Julaine moved to Mauston, WI. He worked part-time at Walmart in Lake Delton for 13 years.

Eugene was an active member at St. Paul Lutheran Church in Mauston, served as a board member of the Mauston Food Pantry, Post Commander of VFW Post 2114, member of the American Legion, and participated in many community service projects. He was awarded the “Living Legend” award for volunteer work of the year. In 2017, Gene and Julaine returned to Kenosha to be near their family.

Visitation will take place on Sunday, February 28th, at Bethany Lutheran Church – Somers, 1520 Green Bay Road, from 12:00 noon until the time of service at 2:00 p.m. with full military honors. Interment will be held privately at Sunset Ridge Memorial Park. Facial coverings and social distancing are required for those attending. In lieu of flowers, memorials to Bethany Lutheran Church or Hospice Alliance would be appreciated by the family.

Posted Feb 21, 2021 at 12:27pm
We send our sympathy to Barbara and your Mom and your family. We are sorry to hear of your loss. It was wonderful that you
had the opportunity to be taken on the Honor Flight in Washington D.C. with your father, Barbara. You both must have enjoyed
that very much. We know you have wonderful memories of him. You are all in our thoughts and prayers.
Sincerely, Carl and Marilyn Sevey
Comment Share
Share via:
JF

Posted Feb 19, 2021 at 10:58am
My deepest sympathy to you, Dawn, your mom and all the family. May all the wonderful memories help to ease your sorrow and give you strength in the days ahead. Thinking of you all--Jan Ferguson
Comment Share
Share via:
DD 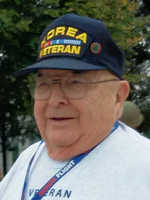