To share your memory on the wall of Donald Holland, sign in using one of the following options:

Print
Today we mourn the loss of a husband, father and grandfather, a man who will be remembered for his deep love of family, faith, and profession, and devotion to his beloved Kenosha.

Donald Kieth Holland was born on July 10, 1928, in Mar... Read More
Today we mourn the loss of a husband, father and grandfather, a man who will be remembered for his deep love of family, faith, and profession, and devotion to his beloved Kenosha.

Donald Kieth Holland was born on July 10, 1928, in Marinette, WI, to the late Helen (Miller) and Marshall Holland. He was preceded in death by his brother, Marshall Robert Holland and wife (Honey) Phyllis, and nephew Dan Holland.

Don was raised in Iron Mountain, MI. After graduating from Iron Mountain High School he entered the Navy Air Corps V-5 Program as a midshipman and received his B.S.C.E from Michigan Technological University in 1950. He was a registered Professional Engineer (PE) and Registered Land Surveyor (RLS) in Wisconsin and Michigan.

After college, he worked as an Civil Engineer for the City of Dayton, OH when The Korean War broke out. After 2 years of service in the U.S. Army, Don enlisted in the U.S. Navy Reserve as an Ensign in the Civil Engineer Corps. He retired after 30 years, ending his service as a Naval Officer, Commander (CDR). He was affectionately known as Commander Don to family and friends.

Don had a long career of civil service. He began employment for the City of Kenosha as Civil Engineer from 1955 until 1957. After positions as Director of Public Works for the cities of Menominee, MI and Franklin, WI, Don returned to the City of Kenosha in 1964 becoming its Director of Public Works. He became City Administrator in 1986, retiring in 1993.

Don continued to serve Kenosha during his retirement. From 1996 until 2010, he was elected 5 times as Alderman of the Third District, guiding revitalization projects, and active in the expansion of the Kenosha Regional Airport and the City's Business Parks.

As a proud, active Kenoshan, Don was Executive Director of Kenosha Sister Cities Association, a member of Kenosha Elks, Kiwanis and Navy Clubs; the Danish Brotherhood, and a longtime usher at St. Mary's Lutheran Church. Don was an avid, lifelong car enthusiast. He loved road racing at Road America at Elkhart Lake, WI and Blackhawk Farms in South Bend, IL. His hobbies included attending car shows and reading every car magazine he could find. He knew the specs, make and model of practically every sports and passenger car. Family would always ask his advice before buying a vehicle. Don was a consummate tinkerer, spending countless hours improving homes, working on projects, feeding his mind, body and spirit throughout his life. He also enjoyed sailing and refurbishing sail boats. Don and Joyce loved traveling, often visiting Kenosha Sister Cities in Douai, France and Wolfenbuttel, Germany, as well as nearly every state in the Union.

Don will be fondly remembered and deeply missed by family, friends, and all who knew and loved him.

Saddened to learn of Don's passing. He was one of the larger than life figures we experience in a lifetime. I know you'll find comfort in your faith, memories, and each other. Heartfelt condolences.

Posted Mar 15, 2021 at 10:44am
My sincerest sympathy to Joyce and family on Don's passing. What a blessing he was for Kenosha! His impact on the development of the Kenosha Lake front will forever be a tribute to him.
Nancy Mathews (retired from Kenosha Public Museums)
Comment Share
Share via:

Posted Mar 12, 2021 at 07:22pm
Joyce and family, we were so saddened to hear of Don's passing. Tom, Thomas and I treasured him as our neighbor and most importantly, as a friend. We have many fond memories as I am sure do you. In times like this, may those memories get you thru. Our condolences and prayers are with you. Melissa, Tom, and Thomas Stein
Comment Share
Share via:
BR

Posted Mar 12, 2021 at 12:29pm
The picture chosen for Don's obituary is perfect; it captures the warmth, strength, and love of this spectacular man. While I did not have many opportunities to spend time with Don, I was able to see the man through the wonderful kids he helped raise after marrying Joyce. This is such a huge loss to the family, Kenosha, and anyone who had the pleasure of knowing Don.
Comment Share
Share via: 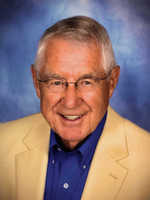