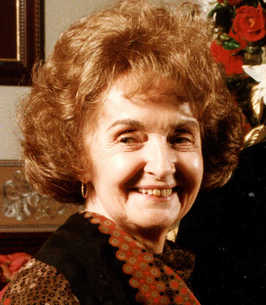 Bette M. Meyers, 93, of Kenosha, passed away peacefully on Monday, July 18, 2022, with her devoted caregivers - daughter Jane and Teresa near her side.

Elizabeth “Bette” Mary Cunningham was born in Kenosha on February 4, 1929, to her Irish immigrant parents, Patrick J. and Beatrice (Ryan) Cunningham with her twin brother William.

Bette attended Kenosha Orthopedic School through her early grades because a birth injury affected her mobility. After successful surgery and therapy, Bette was rehabilitated and able to attend St. George Elementary School, Washington Jr. High, and Kenosha High School where she graduated in 1947. She was a brilliant student and excelled in reading, writing and math.

She worked at the Great Lakes Naval base as a young lady and took secretarial courses at UW-Extension.

On September 5, 1953, she married James Kenneth Meyers and they made their home in Madison where Jim was attending journalism school. They moved to Neenah for a few years and then returned to Kenosha in 1960 to raise their family.

Bette presented herself with a sweet demeanor and great style coupled with a contrasting dogged determination which buoyed her through the hard-working years of rearing four children while working a full-time job as library secretary at Tremper High School from 1971-1996.

She matriculated at UW-Parkside with emphasis on women’s studies and English Literature.
Bette’s interests ranged from gardening to national politics.

She and Jim traveled extensively, often to London and NYC for theatre, as well as to Paris, Ireland and Florida. Their favorite retreat was their cozy Northwoods cabin.

Bette was an active member and volunteer at St. Mark Catholic Church, assisting in office duties.

Although she would have loved to have lived long enough to see the U.S. elect a woman President, she at least got to experience the jubilance of watching the 2016 Cubs win the World Series.

Bette was preceded in death by her husband Jim in 2017, her parents, twin brother William in 2004 and her sister Patricia in infancy.

A visitation will take place at St. Mark the Evangelist Catholic Church, 7117 14th Avenue in Kenosha on Monday, July 25, 2022, from 9:30 a.m. - 11:30 a.m. with a funeral mass at 11:30 a.m. with Frs. Carlos Flores and Jerry Hessel concelebrating. Interment at St. James Cemetery to follow. To live stream the Mass, please copy and paste https://www.facebook.com/ProkoFuneralHome/live_videos/ into your browser at that time.